Jen Hatmaker is a prominent Christian author and speaker. My wife tells me she had a show on HGTV for a while. These days, she’s apparently moved away from renovating homes to renovating Scripture.

That’s a problem, because unlike an old ranch-style house with ugly carpets and 1970’s wallpaper, God’s Holy Word doesn’t need any updates. It’s eternal, unchanging, and always right, no matter how we happen to feel about it. 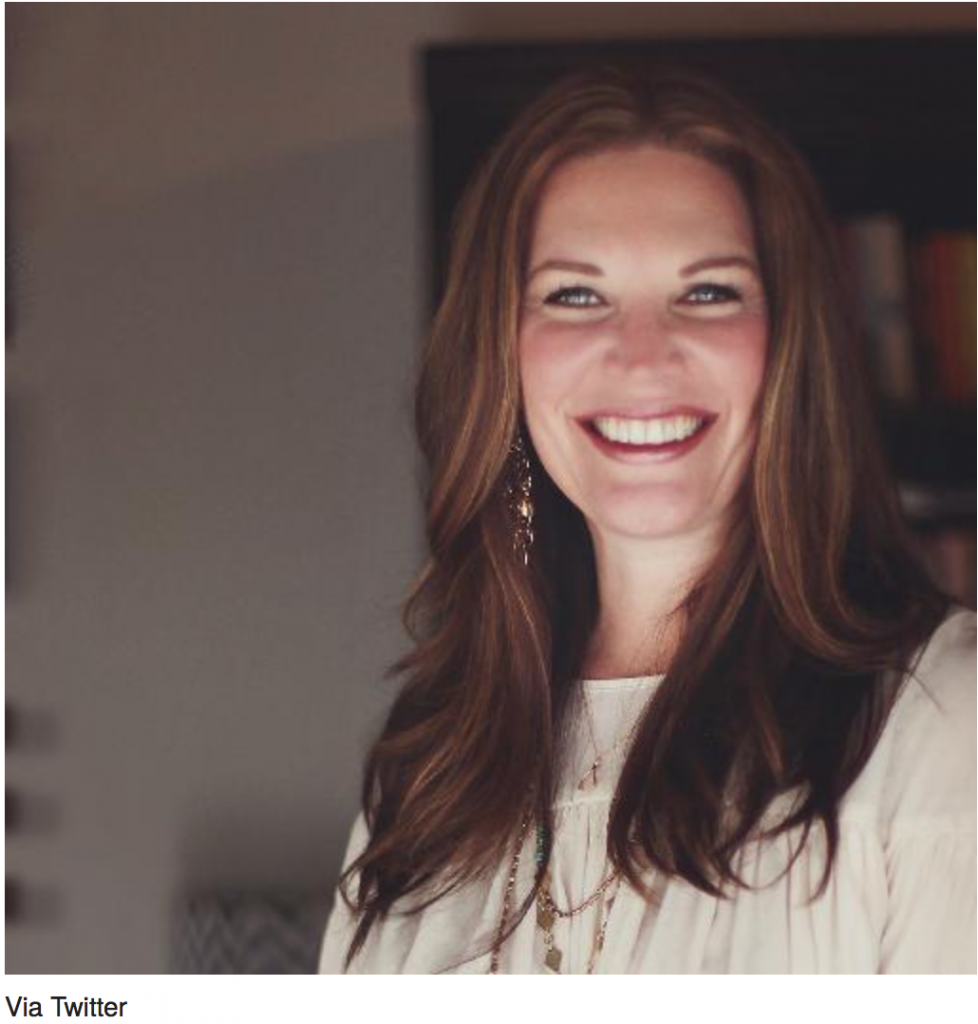 Christians like Jen Hatmaker would do well to remember this. Especially if they’ve been given, or have claimed for themselves, a position of leadership in the faith. It’s a grave responsibility to be a Christian with an audience. As someone with an audience of my own, I know this well. If we contradict Christian teaching, if we misrepresent Christ’s commandments, if we lead people away from the truth and into the darkness, we have not only put their souls in jeopardy but our own. Christ says it would be better for us to drown in the sea with a stone tied around our necks than to cause someone else to stumble into sin. I believe He meant that quite literally.

That leads us to Hatmaker’s interview with Religion News this week.

When asked about gay “marriage,” Hatmaker declared that homosexuals have the “right” to marry members of the same sex. She said our churches should offer support and instruction to those in gay “marriages.” In other words, she believes that churches should not only accept the abomination of gay “marriage,” but actively facilitate it. When asked if she would attend a gay “wedding,” she said she’d be there with “gladness,” ready to pop the champagne and celebrate their sin with them. She said that if her own child turned out to be gay, she would want him to enter a “faithful, committed marriage” with another man. And, in final act of heresy, she announced that gay sexual relationships are “holy.”

This is the Gospel according to Jen Hatmaker. Many supposed Christians in our culture have a similar Gospel. But it may be useful to pause here and reflect on what the Actual Gospel has to say on the subject. Indeed, we either believe that the Bible is the infallible word of God or we don’t. If we don’t, then we shouldn’t be writing books and giving interviews and going on TV and speaking in front of crowds while waving the “Christian” banner. We should renounce the faith, declare ourselves agnostic or atheist or whatever, and then we’ll be free to promote moral relativism and hedonism all we want. We’ll still be wrong, but at least we’ll no longer be heretics. But if we do actually accept the Bible as the unalterable and eternal truth, then we must make sure that we aren’t publicly contradicting it.

So, for the benefit of those Christians who think Scripture was silent on the issues of marriage and sexuality, here are a few relevant passages:

“For this reason God gave them up to dishonorable passions. For their women exchanged natural relations for those that are contrary to nature; and the men likewise gave up natural relations with women and were consumed with passion for one another, men committing shameless acts with men and receiving in themselves the due penalty for their error. And since they did not see fit to acknowledge God, God gave them up to a debased mind to do what ought not to be done.” – Romans 1:26

“Now we know that the law is good, if any one uses it lawfully, understanding this, that the law is not laid down for the just but for the lawless and disobedient, for the ungodly and sinners, for the unholy and profane, for murderers of fathers and murderers of mothers, for manslayers, immoral persons, sodomites, kidnappers, liars, perjurers, and whatever else is contrary to sound doctrine” – 1 Timothy 1:8

“Just as Sodom and Gomorrah and the surrounding cities, which likewise acted immorally and indulged in unnatural lust, serve as an example by undergoing a punishment of eternal fire.” – Jude 7

Hatmaker called gay relationships “holy,” which means divine, while the Apostle Paul called them degrading and unnatural, and promised that anyone who practices homosexuality and does not repent will be barred from the Kingdom of God. As Christians, we are left to ponder who is a greater authority here: The Apostle Paul or the lady from HGTV.

Now, you may struggle with the Biblical teaching on homosexuality, just as you may struggle with any other teaching. You may not understand it. You may find it harsh and difficult and emotionally distressing. But before we even get into explaining why the Bible says what it says, all we really need to establish is that it does say it. Period. We are commanded by God to accept this teaching or risk losing our souls. It’s not an option. We are not required to follow Christ only in the areas where we can find mutual agreement with Him. Our consent and agreement does not matter. At all. Not one tiny bit. We are called to follow regardless. That’s what it means to love God.

If Mrs. Hatmaker finds herself grappling with doubt and uncertainty about this teaching or any other, she should pray about it, consult her pastor, read Scripture, read Christian apologetics on the topic, pray some more and then pray again. She should do all of this in private, speaking only with close Christian friends and mentors who may be able to help her sort through it. But what she should not do — what she absolutely cannot do — is stand in front of the world and declare these teachings moot just because she finds them distasteful. How she feels about them personally is of no consequence. She is not God. Her thoughts and feelings don’t become reality just because they entered into her head.

Obedience is not emphasized in churches very often these days, but it should be. Obedience to God means following Him, standing by Him, affirming His teachings at all times, even when we struggle to understand them. We are commanded to submit to God. Submit. That means give in to His Word and His Law, no matter how it makes us feel.

So, why is gay marriage wrong? Well, first of all, because He said so. I know that reason will not be enough to convince unbelievers outside of the church, but for Christians, if we intend to continue being Christian, it is reason enough. “Trust in the Lord with all your heart, and do not lean on your own understanding,” Proverbs reminds us. If you don’t understand why God condemns the homosexual act, that’s because you lack wisdom and insight. It’s not because God is wrong. Don’t rely on your own understanding. Trust God. That’s the fundamental problem with Christians who try to “update” the sexual morality of the Bible: They don’t trust God. They don’t believe Him. And if they don’t believe Him, it’s hard to see how they could really believe in Him.

But if we do want to understand why God has declared the homosexual act a sin — even if the why of God doesn’t matter nearly as much as the what — I would recommend that we do three things:

First, read the first chapter of Genesis. God looked at Adam alone on Earth and decided that he needed a partner. It is not good for man to be alone, He said, so he made Eve.  This tells us that men and women were, in a very intimate and profound way, made for each other.

Second, read the early passages in the Gospels. Christ was born of a woman and raised by His mother and His earthly father. We call Jesus, Mary, and Joseph the “Holy Family,” but you might also call them the “correct” or “true” family. If we want to know what a family is supposed to look like — and if all of the Biblical words and commands and teachings on the subject are somehow not enough — then we need only observe the physical, literal demonstration God provided for us. He said, “Here is a family, THE family. Make your families like this one.” How much clearer could He be?

Third, read Matthew 19. Jesus, casting away any lingering doubts, describes a lawful marriage in detail: “Haven’t you read,” he replied, “that at the beginning the Creator ‘made them male and female,’  and said, ‘For this reason a man will leave his father and mother and be united to his wife, and the two will become one flesh’? So they are no longer two, but one flesh. Therefore what God has joined together, let no one separate.”

According to the Son of God, a marriage occurs when a man is united to his wife and the two become one flesh. There you go. There it is. There’s the truth. What part of “man united to his wife” is difficult to understand?

These three passages are especially important because they tell us something about the nature of things. Marriage has a certain nature. It serves a certain function. It does certain things and exists for certain reasons, and those things and those reasons and those functions are all made clear by God and His prophets and Apostles. If we read the Bible, we come to understand that gay “marriage” is not simply immoral, but intrinsically impossible. It doesn’t just defy God’s commandments, it defies logic. Speaking of gay “marriage” is like speaking of “dry water” or “rectangular triangles.” It’s simply incoherent.

Now, there are many aspects of the faith that I find challenging and mysterious. Personally, for me, this isn’t one of them. It all seems quite sensible and utterly consistent with the innate moral intuition that all human beings possess. But even if I couldn’t see the logic in Biblical marriage and even if I couldn’t intuit it based on natural law, it would still be just as true, and I would be called to affirm it and profess it all the same. There are many concepts that my puny little brain can’t seem to wrap itself around, but that’s why I must lean on God’s understanding. Not mine. And certainly not Jen Hatmaker’s.

So I would ask Mrs. Hatmaker what she believes has happened in the last few years that all of a sudden changes the fundamental nature of marriage? What exactly have we learned, in our modern and enlightened state, that even Jesus Christ did not know? What is the truth that we’ve discovered that debunks the truth given to us by God Almighty? Yes, a lot of us have icky feelings about Biblical sexual morality, but feelings aren’t truth.

Of course I’m being a bit flippant. Nothing has happened or can ever happen to debunk or disprove God’s truth. All that can happen is that we, in our weakness and stupidity, become blinded to it. And if we are blind then we should pray to have our eyes opened. But until that happens, all we can do is follow God’s voice in the darkness, wherever it leads. That, we should always remember, is the very essence of faith.