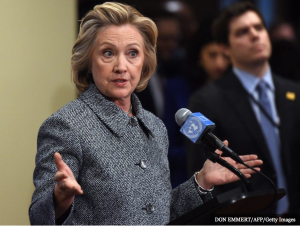 Of the roughly $2 million that federal workers from 14 agencies spent on presidential politics by the end of September, about $1.9 million, or 95 percent, went to the Democratic nominee’s campaign, according to an analysis by The Hill.

Employees at all the agencies analyzed, without exception, are sending their campaign contributions overwhelmingly to Clinton over her Republican counterpart. Several agencies, such as the State Department, which Clinton once led, saw more than 99 percent of contributions going to Clinton.

Employees of the Department of Justice, which investigated Clinton’s use of a private email server while she was secretary of State, gave Clinton 97 percent of their donations. Trump received $8,756 from DOJ employees compared with $286,797 for Clinton. From IRS employees, Clinton received 94 percent of donations.

Trump campaign spokesman Jason Miller said these donation patterns are more evidence of the “rigged system” favoring establishment candidates like Clinton over outsiders like Trump. The Trump campaign has been citing lopsided media donations to Clinton — though there’s no evidence they’re coming from reporters covering Trump — as further evidence that the game is fixed.

But David Schultz, a Hamline University Professor of Political Science, said government employees have historically favored Democratic candidates over Republicans both in their voting habits and political contributions made in their personal time.

Under the Hatch Act, federal government employees are banned from engaging in political activities, including making campaign contributions, during work hours.

“Government employees are, on balance, more moderate or more liberal as opposed to the general population,” Schultz said. “Not across the board, but in general.”

Government employees are “more likely to believe in government as opposed to, let’s say, a privatization program,” he added, “programs that we would view as hostile to government.”

Yet while Republicans usually do worse than Democrats, Trump appears to be doing especially poorly in fundraising from government employees.

Romney got close to $300,000 more from these same departments’ employees than Trump has four years later. Comparisons to previous presidential candidates are of limited value, since they took public funding for their general election campaigns.

Trump might have had a chance to do better than Romney. He discarded much of Republican orthodoxy during his primary campaign, which could have led some federal employees to believe that he’d be more amenable to big government. He vowed, for example, to leave massive social welfare programs virtually untouched.

Trump vowed “tremendous cutting” of the government in an interview with The Wall Street Journal in January and singled out the Department of Education and the Environmental Protection Agency as agencies he’d slash dramatically if not outright eliminate.

Agency employees have likely taken note of Trump’s hostile rhetoric. In the Department of Education’s case, that included Trump’s pledges to hand over control to the states and to fight tooth and nail against Common Core standards.

From Department of Education employees this cycle, Trump received three donations totaling $220. Clinton received 724 donations for more than $74,000. In all, she received 99.7 percent of donations from employees of the department.

Throughout his campaign, Trump has portrayed himself as a strongman who would toughen up America’s defenses — both militarily and at the border — and who would take care of veterans. It’s probably no coincidence, therefore, that Trump performed best in donations among employees of three agencies: Defense, Homeland Security and Veterans Affairs.